Cold Comfort is a post-punk revival project of three guys from the Ukrainian city of Rivne. 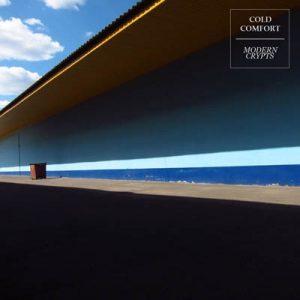 Regardless of the further history of Cold Comfort, their name will forever be inscribed in the history of Ukrainian rock music. Not only because they are the first who in our latitudes tried on the label “coldwave” – ​​I think this move is not entirely legitimate, because their music does not resemble either French or Polish coldwave. And even their debut mini-album did not become the first among high-quality post-punk releases in Ukraine – this place rightfully belongs to the Seahorse group. But it is in such a rather thin niche between minimal wave and post-punk that Cold Comfort became pioneers, and for this I place them very highly in their merits to the general musical process of our country.

Cold Comfort is a trio from Rivne, formed in 2012. The duties of the guitarist and vocalist in it are performed by Alexei, known to many for his guitar work in the bands And We Burn and Selma. When you first listen to their music, you get the feeling that the guys just appeared out of nowhere – we, frankly, have never had a tradition of such music. Along with this, pride in our scene also arises, because in this case the musicians not only know how to compose and play music, but also have a vivid understanding of the musical tradition of the Western scene in its not the most popular aspects. If the Seahorse mentioned above veered on the verge of post-punk and dream-pop, which was in tune with Lowlife and The Chameleons, then Cold Comfort took an even more fragile path of combining dark electronics with gothic rock, which is reminiscent of the second wave of gothic rock or newer projects, especially She Past Away.

In addition to the very fact of the appearance of such music in our latitudes, this album also shows a number of other advantages. The six tracks presented here are diverse, but not so varied as to go beyond the stated aesthetic. The mood of the music is characteristically gloomy, the lyrics tell about the dark sides of life and tune in to self-deepening and contemplation of eternal questions. The vocals are quite distant and draw little attention to themselves. However, the only complaint is about the vocals – it could be a little more varied in some tracks, where it seems quite appropriate. I would also like to parse by ear the texts that inspire the best feelings when read, but such a manner of vocals makes this opportunity practically inaccessible.

As for the songs on the album, there are no obvious hits or weak tracks here. Separately, it is worth highlighting the slowest track One Year Closer, which is very reminiscent of the early The Cure and demonstrates in the text a gloomy irony about the celebration of a birthday: “Happy birthday, happy doomsday to you” (“Happy birthday, happy doomsday”). I would also mention the last track, Wax, the only one in which the vocals make me extremely admired.

I highly recommend this album to everyone who is interested in the dark scene and loves the music of this direction. For many, these songs can become frequent guests on the listening lists, for someone – just an interesting experience, and for those who are interested in the domestic scene – a reason to rejoice separately for the emergence of rare niche music in our space, which, you see, is a very good sign. The musicians themselves would like to sincerely wish to further develop in what they do, and in the near future to please us with even more interesting and profound work in a similar aesthetics.